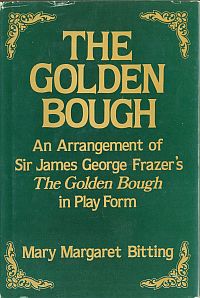 I know very little about Mrs Bitting but no one could say she lacks ambition. To attempt to adapt Sir James Frazer's classic work of anthropology The Golden Bough for the stage she must have extraordinary faith in her apparently untested abilities as a playwright. She could have picked a book that already has a plot, settings and a cast of characters but that presumably would have been too small a challenge for her talents, so instead she opted for an enormous scholarly dissertation on mythology and religion. The result is described in the preface as:

... a free-wheeling version that includes a thematically relevant framework, songs and dances.

Yes, it's a musical, though not one likely ever to have a long run on Broadway. For some reason Mrs Bitting seems to believe that an audience will find entertainment in watching an array of characters, some human, some supernatural, spout large undigested chunks of Frazer's text interspersed apparently at random with songs, as in this extract:

Demeter. From the votive offerings which have been found on site, it appears that she was conceived of especially a huntress, and further as blessing men and women with offspring, and granting expectant mothers an easy delivery seems to have played a foremost part in her ritual.

The figures of the two Goddesses, and Demeter resolve themselves into personifications of corn and wheat.
Demetrius. Many of the epithets bestowed by the ancients on Demeter mark her intimate association with the corn in the clearest manner. Demeter, as goddess of the corn, may be judged by the circumstances that the faith actually persisted among the Christian descendants at her old sanctuary of Elevis down to the beginning of the nineteenth century.

Grass King. Sometimes the grove shines with a multitude of torches, and fire seems to have played a foremost part in the rituals, whose ruddy glare was reflected in the lake.

Dentrius. On the whole, then, we conclude that at Nemi the King of the Wood personated the oak god Jupiter and mated with the oak goddess in the sacred grove. An echo of their mystic union has come down to us in the legend of the loves, who have had their trysting place in these holy woods.

Persephone. Not only the loves, but some of the hatreds and sorrows, especially priests and gods who wished to kill each other, to gain power and influence among the tree-spirits and gods. It seems hardly possible to separate from the May trees the trees or branches which represent death, or which summer or life. (A doll attached to the summer tree is a representative of summer and life.)

Gods. (sing from Paradise Lost) Adam, the while, waiting, desirous of her return, had wove of choicest [flowers] a garland to adorn her tresses, and her rural labors' crown, as readeys [sic, for reapers] oft are wont their harvest queen.

The whole play is like this. It's insane. I take particular pleasure in that stage direction where the actors are supposed to “resolve themselves into personifications of corn and wheat”. Glorious.

Frazer's discursive prose makes rotten dialogue, plainly, but Mrs Bitting's translations of it into song are even more excruciating. For example, Frazer writes (from chapter 68 of the abridged edition of 1922):

It is not a new opinion that the Golden Bough was the mistletoe. True, Virgil does not identify but only compares it with mistletoe. But this may be only a poetical device to cast a mystic glamour over the humble plant. Or, more probably, his description was based on a popular superstition that at certain times the mistletoe blazed out into a supernatural golden glory. 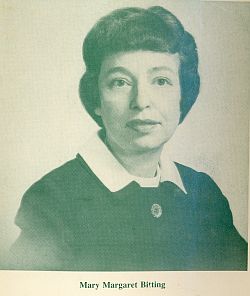 Mrs Bitting is inspired by Frazer's words to make a song, called “It is Not a New Opinion”:

It is not a new opinion
Between you and me
That the yellow blooms on
the vast old tree
Are just the result of
the thunderbolt
Which left the green foliage
on the old great oak
Known for years as the
kissing vine
Or just a custom, from
the Grecian time
The mistletoe, with its many charms
and legends
Has cured the ills and pains
of the Grecian region.

The song is supposed to be performed by an actor in the part of a butler, which I suppose is no more crazy than the rest of Mrs Bitting's conception. The blurb tells us that amongst other works she is the author of To Vodka With Love, “a lively collection of recipes featuring vodka as the main ingredient”. Further comment would surely be superfluous.

I resolve myself into a

I resolve myself into a personification of a spambot.

I am glad to have landed in

I enjoy your spammy comment so much for its pithy incisiveness. It is a nice one. Send more, please, though I must always excise the unfortunate links.