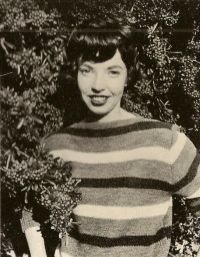 In Incredible Alliance P. M. Doucé describes her experiments with automatic writing, in which she found herself filling pages with what seemed to her untrained mind to be poetry. Seeking further information about the source of this unbidden literary effusion, she consulted a psychic who told her that she had become the conduit for the posthumous creations of none other than T. S. Eliot.

I wonder on what basis the unnamed psychic made this diagnosis. It does not seem to have involved any form of textual analysis, for as you'll see the resemblance between the verses produced by Doucé and those of the living Eliot is limited to their both containing words that might be found in a dictionary. The author of the Four Quartets and The Waste Land would appear to have shed all his mastery of language, his ambiguity and multi-layering of imagery in favour of a style that combines the philosophical insights of Patience Strong with the formal precision of E. J. Thribb. (Regular visitors to this site will already be aware of the extraordinary effect of death on great talents).

Instead of laughing at the suggestion that her portentous witterings emanated from the ghost of one of the 20th Century's greatest writers, Doucé took it at face-value and compiled this book in a sincere attempt to bring Eliot's afterlife wisdom to the world. Disappointingly, it was not picked up by Faber and Faber but instead had to be issued through the vanity house of Dorrance, who therefore had the privilege of being the first to print such gems as this one:

For in these arms I lie
And seek a new today
A new tomorrow full of todays
When colors blend
And form their different hues
And man responds
To all the new and wondrous ways
Of universal tranquilities.

Then in those warbles
Do the heartstrings sing a tune
Too enchanting for the ordinary,
Only the extraordinary
Will survive to harmonize

When
All men seek
And
All men find
Eternity.

On the blurb, Ms Doucé says that before her "personal experience with Eliot", she "had no understanding of his genius." That, I would say, is an understatement.

If you're cute enough, no

If you're cute enough, no one cares how bad your poetry is.... I'm not that much of a fan of Eliot, but this stuff - like most poetry - is utter drivel. Sturgeon's Law says that 90% (optimistically) or 99% (pessimistically) of any genre is drek. But I suspect that with poetry the percentage is more like 99.99 - and that's just what gets into print.
Submitted by Anita Dalton (not verified) on 08 Feb 2010 - 04:41 Permalink

You manage to find some

You manage to find some amazingly insane older books. I feel this one will soon be on my "please let Amazon have this one somewhere in a condition better than acceptable" list. This book does not, I fear, answer the eternal question of why it is that amazing talents channel themselves through such untalented people. Nor does it explain why the pretty ones are always crazy. But damned if I don't want to read it anyway.
Submitted by JRSM (not verified) on 07 Feb 2010 - 23:06 Permalink

Another gem. Also, am I the

Another gem. Also, am I the only one to think that Ms Doucé is unusually cute for a literary nut-job?
Submitted by Alfred Armstrong on 08 Feb 2010 - 00:33 Permalink

Way cuter than T. S. Eliot. Maybe there should be a section of the site called "Hot Nut or Not Nut?".

'T.S. Eliot' is, of course, an anagram of 'toilets', which would seem to be the natural home of the poetry on offer. 'Psychic', strangely enough, is not an anagram of 'poet'. The lyrics on offer have echoes of Morecambe and Wise's timeless sonnet 'Bring Me Sunshine'...