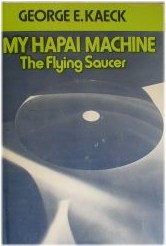 Most references say the first use of the term “flying saucer” was in 1947, after pilot Kenneth Arnold reported seeing UFOs on 24th June of that year. On the 8th July the London Times used the term in an item about Arnold's sighting. Ironically, Arnold had not not actually said he saw saucer-shaped objects, rather that they were curved rather like a boomerang, but he had referred to their motion being like “like a saucer if you skip it across the water”. The word saucer was taken out of context by journalists and we have been stuck with it ever since.

That is the conventional wisdom on the matter, but retired elevator mechanic George E. Kaeck tells a different story in this little book. According to him, he actually coined the term back in 1941, to describe an invention he also calls the “Hapai Machine” (“Hapai” is an Hawaiian word meaning “pregnant”).

Believing that he had come up with something that would be of use in fighting the war against the Japanese, he attempted to get the US Navy interested in his idea. He reproduces much of the correspondence he had with the military hierarchy and other parties, which he seems to believe is evidence that he was given the “runaround”. He thinks that the military decided to develop his idea, but in secret, without ever telling him they were doing so.

Upon reading the news of Arnold's sightings in 1947, Kaeck concluded that it must have been his invention that Arnold was talking about, not saucers from outer space but top-secret military craft based on his designs, as he explains:

When I first read the article I said to myself “This may be the way the government is trying to tell me that it is developing the 'Flying Saucer.”

But despite continuing reports of saucers being seen around the world, Kaeck's longterm wish that his invention should be exploited for the benefit of his country and for humanity is never fulfilled. He says:

I am not out to benefit greatly financially by bringing out the true facts, but would like to see the safest of all transportation developed.

He also refers to his idea as “the machine that could have been usefully enjoyed for the past 30 years instead of being described as a myth”.

Fortunately Kaeck provides all the materials we need to evaluate his design, including a fold-out reproduction of the engineering drawings he gave to the Navy. I was slightly surprised to find that the basis of it was not a mysterious anti-gravity or “free energy” (ie. perpetual motion) device like those that one usually finds in flying saucer proposals, but good old helium. His machine is what he calls a “semi-dirigible”, a huge disk constructed as a thin aluminium sheath filled with bags of helium, (or “balloons” to you and me). One of the letters he reproduces, from a Mr Fosburg of Westinghouse - the company for which Kaeck was then working - makes clear the problems with this design:

... [it] would not be expected to go much above 10,000 ft. because of the problem involved in expansion of the helium within the envelope. Judging from the Aerodynamic configuration we would estimate that the maximum speed obtainable would be somewhere between 100 and 200 mph ... the combined lift of the craft would be 90,520 lbs ... the total weight of the craft would be be approximately 90,000 lbs exclusive of payload.

Fosuburg's calculations are slightly ambiguous as to whether his figure for the lift takes into account the weight of the craft, but the way it is worded leads me to believe that it does not. If so, Kaeck's saucer would have a net lift of about 520 lbs, barely enough to raise a three man crew off the ground, let alone all the bombs and guns that figured in his plans of 1941. (Presumably this is why blimps are not made of aluminium). Kaeck, however, seems to have missed this point, continuing to believe his ship could carry usefully heavy loads. He also persisted in trying to gain recognition for the invention of the term “Flying Saucer”, though as he he had no evidence of this as such, merely some old drawings labelled “Semi-Dirigible Cruiser and Bomber”, nobody took him seriously; even an attempt to pull strings via his Masonic connections came to naught.

Kaeck does not directly say so but anyone who watches the X Files must wonder whether his frustration is the result of a sinister plot cooked up by the US Government - probably with the aid of Big Business and the Masons, not to mention the real aliens who are Behind Everything. Though they don't want us to know what they are up to, thanks to this book next time you see something silvery creeping very very slowly across the sky, you'll surely look again: maybe it's just a weather balloon or the planet Venus but maybe not, maybe it's something else, maybe it's a Hapai Machine, the original Flying Saucer.