Brainwashing is a Cinch! 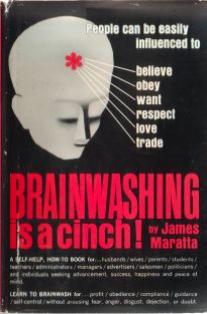 Judging this book by its disturbing cover, with its promise that “people can be easily influenced to believe, obey, want, respect, love, trade”, you might expect to find it describing techniques such as sleep deprivation and how they may be used to bend the wills of your prospective slaves; but any would-be Charles Manson picking it up in the hope of tips on building a flock would be disappointed. What James Maratta means by “brainwashing” is, mildly enough:

... the process whereby ideas are transferred from one mind to another without provoking or offending the recipient.

Accordingly, he starts by passing on some well-tried rules of salesmanship, such as that in order to persuade one should avoid using negative terms, but although he claims to be an experienced teacher of the techniques of influence he does not have much original or inspiring to say on the subject. He is altogether more sure of himself when it comes to spouting his personal philosophy of life, the inclusion of which he justifies on the basis that by doing so he is helping the reader to resist “brainwashing” by government or the social consensus. Ironically perhaps, he makes no attempt here to avoid “provoking or offending” his reader:

On matters of race in America:

Negroes by pure instinct respect, admire and follow the white man, and in their hearts they wish him well, even though at times they rebel against him. For whites are not perfect and never will be; but as far as standards of living are concerned, they provide the best. And you will also note that blacks always want to move near whites, not away from them.

All this talk about the equality of the sexes is pure nonsense. Women cannot equal men. [...] All that women can do is what men teach them.

[...] All that Grandmother had to do to be blessed with love, and later with marriage, home and children, was to look like herself, remain a virgin, dress modestly, avoid overexposure at the beach, wear long hair, and refrain from drinking hard liquor, smoking cigarettes, using vile language or being seen out alone after dark.

His essential philosophy, though, is typical of the self-made man in that he believes that because he overcame difficulties in his life anyone else can do the same. As he puts it:

Despite my poverty-stricken beginning, foreign ancestry, lack of education and a somewhat irritating personality, I couldn't help but achieve my deserved measure of success and financial rewards.

“Irritating personality”? Well, I'm persuaded. But, as to his “deserved measure of success”, I can't help thinking of that line in Leiber and Stoller's immortal Shoppin' for Clothes, as performed by the Coasters:

“I got a good job sweeping up, every day”.

New! Easily influence people with a snazzy Brainwashing is a Cinch t-shirt from the Odd Books shop.

Mike...I am your cousin....Nancy's daughter...After reading a portion of this book, I was not surprised of it's content. As Karma would have it, Grandfather died a poor man. Lost everything in the stockmarket downturn of the 80's. I will admit, he was an interesting person....but not someone I would have wanted to associate with. I believe he lived his life exactly as HE wanted to....and EGO was his downfall !!
Submitted by Mike jr maratta (not verified) on 27 Apr 2019 - 22:27 Permalink

I don’t know if you will see

I don’t know if you will see this or not but I never realized you replied. If you like to get in contact email and I can give you my number. Email is Maratta0311@gmail.com

You may not have wanted to

You may not have wanted to associate with him Sue T, but he was the one that paid for your millions of toys growing up and all of your mother's medical bills for so many years.
Submitted by Alfred Armstrong on 28 Sep 2011 - 10:40 Permalink

Step up and wash your linen

Step up and wash your linen here, folks!

No one has seemed to notice

No one has seemed to notice this is one of the funniest comments on the internet. I hereby notice.

I am nothing like you were. I have pity on your soul Grandfather.

This was my greatgrandfather.

This was my greatgrandfather. he was the one that wrote this book. but what he wrote and meant was very good for the years he lived in. I only wish i knew more about him and my famiies history
Submitted by Anonymous (not verified) on 13 Oct 2009 - 10:58 Permalink

This is interesting. Pure

This is interesting. Pure nonsense on what they think of womens rights, because we can learn for ourselves. But it is very intersting
Submitted by Anonymous (not verified) on 19 May 2009 - 04:04 Permalink

Oh for the love of

Oh for the love of God...this guy gives my puny girly knuckles an itch that only his teeth can scratch. So much for not provoking.