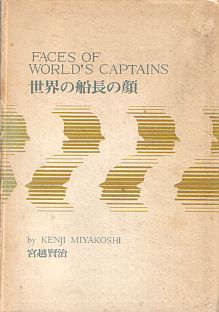 Once in a while I come across a book whose oddity is charming rather than idiotic: Faces of World's Captains is one such. It records a series of drawings made by Kenji Miyakoshi when he was working as a harbour pilot in Tokyo Bay. Whenever he had piloted a vessel he would make a sketch of its captain from memory. Finally he had about 3000 drawings of which more than 600 are collected in this self-published volume. He says of his work:

It does not matter whether these are good or bad from the artistic point of view. What I am hoping for is that this notebook would serve as a good souvenir after I quit the job of pilot.

My copy was presented to a Captain Forrester of Hull, an appropriately nautical dedicatee. I hope he appreciated it. You will note that each drawing is labelled with the name of the ship rather the captain portrayed, lending it a rather bizarre effect in many cases.