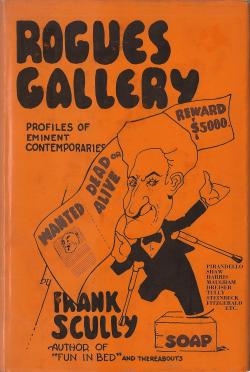 In his 1943 book Rogues' Gallery Frank Scully provides us with profiles of various notable writers of the period, including Bernard Shaw, Steinbeck, and Pirandello. These are generally low on original insights and much of the material is peripheral to say the least: his chapter on Upton Sinclair is largely about Scully campaigning for Sinclair during his run for the governership of California and that on F Scott Fitzgerald concerns Scully's visit to see his corpse when it was lying in state after Fitzgerald died in 1940. These meagre pickings are padded out with material garnered from newspapers and other generally accessible sources. If there is anything interesting to find in this book, it is in the way that Scully shamelessly elevates himself at the expense of his subjects.

Perhaps the most diverting example is that of Thomas Mann, who Scully met at the house in California where the self-exiled Mann lived from 1942 to 1952. Scully takes a snarky tone from the very start and one may wonder what was his beef with Mann:

My first view of Thomas Mann was what architects call a "rear elevation". He was sitting at a telephone in his house on a hill above Santa Monica, and his back was to us as we passed, under escort of his wife, to a little terrace beyond the main room of his house.

It wasn't a terrace really, but a little triangle the architect had left over and didn't know what use to make of it. The Manns had squeezed four chairs on it; considering it was only a step, down to a half acre of parched lawn and beyond that. miles of slopes and shrubberies, this was carrying clubbiness to the point of congestion.

As it happens, there's a photograph of the area in question in the Getty Images collection, and it looks an ample space for four adults to sit and converse. But Scully has other reasons for complaint, which will become clear.

As the Scullys arrived, Mann was on the phone in the living room:

He was talking in German. When people talk a foreign language in your hearing, you're almost certain they are talking unfavorably about you ...

Since as we will see, Scully liked to present himself as a champion of anti-fascism, this hint of xenophobia is quite telling.

Scully fills in the time by chatting with Mrs Mann, who had arranged the meeting. She was "quite willing to talk about [...] the life of the Manns" which gives him the opportunity to present us with a potted biography in which he is keen to make Mann seem an unworldly soul who barely noticed the rise of the Nazis:

Undaunted, by either a collapsing world or the rise of Hitler, he proceeded to write a series of books on the biblical Joseph and his brethren. [...]

Though coming from a family which had been active politically, he didn't seem to sniff even the foul air of Nazism, which was circulating all around him in Munich, until 1936, when he broke a long silence to answer an anti-semitic attack. [...]

After that, as an exile, he spoke early and often, and with an eloquence which contrasted to the leisurely involved and sometimes windy irony of his novels; but it was too late, then, to overcome Hitler with eloquence.

In fact Mann had denounced Nazism publically in 1930 and in 1933 fled to Switzerland to escape their regime. But Scully apparently is able to take the higher moral ground:

Having been considered a fool myself for neglecting a career as a writer to put my shoulder to the wheel of social and political reform — and not unsuccessfully, either, as many fascist-minded politicos in America will tell you — I wanted to meet a man who had waited too long to fight back and in consequence lost his particular war ...

I thought back to the time I had directed Victory Center in New York. This was a civilian clearing house for any ideas that might help win the war. Nat Singer, a Columbia classmate of mine with a similar idea, financed the task of getting the clearing house operating. He favored enlisting "big names" as a means of making the idea succeed.

Not once, but a dozen times, well-intentioned friends urged that I get out of things of this sort and stick to writing. Many of them in the next breath would say, "But if you must persist in it, why don't you get a man like Thomas Mann on your committee?"

"Listen," I would tell these well-intentioned kibitzers, "if Thomas Mann had done in Munich, twenty years ago, what I have been doing here he wouldn't be an exile from Germany at this moment and I wouldn't have to be doing what I am doing today. Men like Mann could have stopped Hitler when his mouthings were a mere trickle — if they hadn't been so aloof about consorting with the peasantry.

"It is silly to say you will have nothing to do with politics, that it is a dirty business best done by second-rate people. You live in a political society and you can make it as good or as bad as you like. Isolate yourself, and you will find the lice have hemmed you in on every side. Democracy functions best when everyone takes part in the delousing. But men like Mann have put themselves down as distrusting the masses — with a skeptical eye turned towards the heroism of the underdog. He won't do my committee any good."

Naturally, talking like that made it imperative that I meet the Mann I was possibly maligning. I had made a long trip to meet him ... But he was on the telephone ...

Egocentric journalism is clearly not just a recent phenomenon. Anyhow, after some smallish talk about The Magic Mountain, Scully gets to business, asking Mann directly if he had "a distrust of the masses". Mann is puzzled by the question, and gives a noncommittal response, which for Scully is enough excuse to climb on his high horse and pontificate about Jesus:

The reason I asked, I explained to them, was that Christ's compassion for the crowd was just the opposite. He couldn't speak when there were only a few fishes and seven loaves to feed a multitude of four thousand — because if they were hungry He was hungry, and if He were hungry He couldn't speak. In the end, He had to perform a miracle to remove this hunger which all of them shared.

In much the same way, he didn't want the rich to give up all and follow Him because he wanted the rich to be poor. He wanted to save the rich — who otherwise had as much chance of getting to Heaven as a camel through a needle's eye. The poor were already saved. This it seemed to me, was a lot different from having a certain distrust of the masses which fed, clothed and housed all of us.

One can imagine Mann looking at his wife with an expression that said "who's this jerk, again?".

The jerk in question, Frank Scully (1892-1964), was a journalist and writer, mostly of purportedly humorous prose. For a while he was Frank Harris's personal secretary, and this book appears to be an attempt to emulate Harris's Contemporary Portraits. Scully did not have Harris's ability as a writer, though he shared his lack of commitment to the truth: in this same volume he claims to have written Harris's biography of Shaw, though, as explained in the article linked to, he certainly did not. Later in life he was also involved in a notorious UFO hoax, though possibly in this case he was more gullible than duplicitous. In 2005 Paul Kimball wrote an excellent and well-researched blog post which tries to get to the bottom of Scully's involvement with the hoaxers.

[Thanks are due to Paul Kimball for making his post available again.]

Scully suffered throughout his life from poor health and physical disability, and it is to his credit that he maintained a career despite these disadvantages, but that of course does not give him a free pass.

Scully continued to lecture Mann on the recent history of Germany but unfortunately there was an interruption:

[...] a few minutes after our first cup of tea, a tall, dark, heavy-set man carrying a portable typewriter, came across the lawn, bowed in a reserved, servile way and went indoors. Mann seemed eager to join him.

I asked him if he worked afternoons.

He said no, but that he used his afternoons for correspondence.

He then asked me what I came for so we could discuss it and he could join his secretary. Mrs. Mann could take over and talk for him, he explained.

"Nothing and everything," I said.

No doubt confirmed in his opinion of his guest by this gem of pomposity, Mann left and did not return. Scully was smart enough to recognise the snub, but not enough to blame himself for it. He signs off with a final priggish retaliatiory squib:

At a Nobel Prize dinner before Christmas in 1943, Mann spoke in favour of the "Americanization of the world" — a piece of moral policing which brought Pearl Buck's ruler down on his knuckles.

Maybe "the world" was too large an order, but he could certainly start Americanizing the hills west of Hollywood and east of Santa Monica. He could teach his fellow-exiles what he has yet to learn himself: that hospitaility in the West is not phoney and can't be faked.

It has to be felt.

Yes, Herr Mann, you should welcome any self-important dipstick who comes to your house to expound his sophomoric opinions: it is the American Way.

It's a shame the link to Kimball's blog doesn't work -- at least, the link may work but the blog is "invitation only."

I contacted Paul Kimball and

That must have changed since

That must have changed since I wrote the post, it was definitely public a few months ago - thanks for pointing it out. I'll have to see if I can get him to make it available.