Valley of the Pyramids 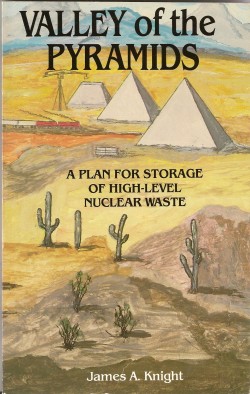 There is a special circle of Odd Book heaven reserved for elderly gentlemen who spend their retirement documenting the one great idea of their lives. George E. Kaeck had his Hapai Machine, Leo D. Holloway his DDT Notation and James A. Knight his Valley of the Pyramids. Each of these was possessed by a great notion that for some reason had failed to inspire the interest they felt it deserved, despite the many letters they wrote to newspapers, prominent people, and government officials. Undaunted, they turned to self-publication. If only their idea were to exist in the form of a book, surely then the world would take note.

In Knight's case the bee occupying his busby was that of the storage of nuclear waste. A serious matter, certainly. He came to the singular conclusion that the solution to the problem was a pyramid scheme - to build a series of pentahedral concrete containers in locations such as the desert of Nevada to contain the unwanted byproducts of nuclear fission. Those in power were alerted through the following communication:

I am James A. Knight, 77 years of age and I have a dream. I want to build a pyramid.

I believe this pyramid can be built and at the same time take care of a serious problem we have in this great country, ATOMIC WASTE.

Most states will be anxious to have the pyramid built in their state, as it will be a great tourist attraction. At the present time no state wants atomic waste dumped in their area.

The building of the pyramid will progress as we need to dispose of the nuclear waste. The waste will be poured into the concrete, being dispersed and separated to prevent reaction.

The people producing the atomic waste will pay to have it buried in the concrete. Atomic waste will be shipped to the pyramid location, from all parts of the United States, or any foreign country.

The pyramid could be built in one of the western states, probably in the southwest desert. A good place to build the pyramid would be in the open desert, away from populated areas.

The pyramid will be indestructible and be a permanent storage for the atomic material. The amount of waste to be disposed of will determine the eventual size of the pyramid.

I would like to get credit for coming up with this idea, and am willing to serve as a consultant for a reasonable salary or stipend, from any individual, company, or the federal government.

I will appreciate any advice, information, or help you can give to further this project. I have spent about one year researching this project and have accumulated a lot of information,

Drawings and other technical data can be furnished to anyone interested.

This modest and optimistic manifesto is the substance of his book, padded out to 140 pages with reproductions of letters sent and received, personal reminiscences and estimates of what dimensions the pyramids would be: at 300 yards square at the base they'd overshadow than those of Egypt by some margin.

Despite his self-confidence and determination to think big, nothing seems to have come of Knight's lobbying, and the wild spaces of the US remain lacking in giant monoliths full of radioactive waste, sad to say.

The only real problem with

The only real problem with this idea is the expense - and would it be any more expensive than the Yucca Mountain facility that foundered on problems with geological stability? Modern technology could build much more durable pyramids that the ancient Egyptians, and there are large areas in the western deserts that will never be of use for anything else. Such structures would "float" on the surface of the land and be immune to earthquakes. They would be vulnerable to large meteor and ICBM strikes - but what isn't? If we wait for absolute security, we will never have a relatively safe storage site for nuclear waste.

I didn't know concrete was

I didn't know concrete was indestructible. Other than that, why not?

Considering his age when the

Considering his age when the book was published, we can be thankful for his passing. And where can I find odd books like this?

I sat at the feet of an old

I sat at the feet of an old yogi for many years. If nothing else, it gave me the ability to enter dank old shops without flinching.