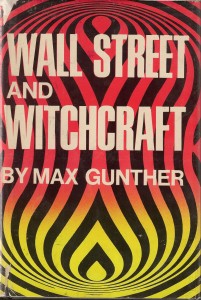 With Martin Scorsese's film about the worst excesses of Wall Street in cinemas in the UK this week, I thought I'd take this book off the shelf and thumb roughly through it. It takes a rather more esoteric view of things than Scorsese: Max Gunther reckoned that success on the stock market is to be realised not by adopting the methods of sociopathic conmen but through invoking the mysterious powers of the occult.

Gunther's book follows the familiar journalistic scheme of a series of personal encounters with odd folk, piling up anecdotal evidence with the expectation of persuading the reader that there's something in this stuff, even if it's not very clear what. In publishing it, he was probably hoping to follow in the footsteps of other compendia of crapulousness such as Chariots of the Gods? and Psychic Discoveries from behind the Iron Curtain, both of which had enjoyed popular success not long before.

He starts his journey into the shadows by introducing us to T, O. Tulley, an elderly gentleman whom Gunther nicknames The Man Who Was Never Wrong. As it turns out, Tulley was merely The Man Who Was Mostly Right, but regardless his record is impressive: in fifteen years after taking up trading he turned his starting pot of $3,000 into $800,000. His performance was due, he told Gunther, to being some sort of mind reader:

"... anything that's going to happen on the market tomorrow is pretty well decided right now in people's minds ... if you have some way of knowing what people are thinking .. then you know what the numbers on the tape are going to be ..."

"My head seems to be some kind of receiving station for all those millions of thoughts ... I can tell when optimism is rising and when it's waning. Not all the time, you understand. But enough of the time."

Tulley's case seems extraordinary, until one remembers that with so many trying their luck on the markets there are bound to be some who are consistently successful for no apparent reason. For every Tulley there are thousands who do no better than the average and a few who lose everything. That's the nature of gambling. It's also human nature, when one is abnormally fortunate, to attribute one's good fortune to some power, whether it be ESP, prayer or a pair of lucky pants.

Gunther terms those with Tulley's apparent gifts "feelers". Tulley himself claimed to have had his ability since childhood, and had no idea where it came from nor how others might do the same. Offering more hope to the reader, another feeler, an unnamed "former English teacher", is reported at second hand that it is possible to acquire the skill, or at least enhance it:

"He said he practices by standing around on street corners on New York and trying to predict the number of the next bus."

Worth a try, perhaps, as a relatively cheap investment in psychic possibilities. (Does it work only in New York, and with buses? We are not told.) But if that doesn't appeal, as being too proletarian and exposed to the vagaries of the weather, one might prefer to opt for astrology, which at least can be practised from one's armchair.

Accordingly, Gunther's next interviewee is stargazer David Williams, who like Tulley makes extraordinary claims for his predictive powers. According to Gunther, he said in 1970 that he has "not lost money on a single stock" since 1958. (Other sources are more modest, attributing an 80% success rate to him). If this were true (even at the 80% level), then his other boast to Gunther, of having "doubled his money every three years", would seem oddly unspectacular, even if impressive by everyday standards (equivalent to around 26% compound growth per annum). If he'd started with Tulley's three grand in 1958, he'd only have reached $24.000 by 1970. Not exactly one of the Masters of the Universe: more President of the local golf club.

Another who touts the power of astrology is one "Madeleine Monnet":

She is a woman of great grace and charm ... Today she has one home in Kansas, another in Larchmont, a Cadillac, a mink coat, lots of diamonds and a serene expectation that she will be a millionaire before she dies.

"Astrology did this for me", she tells her clients and students.

Indeed. According to another writer on the subject, Monnet had a column syndicated in about 50 newspapers. That's how astrology makes you rich. Unless, as her obituary says, it doesn't.

The stars may not be so great a bet, then, but what about the spirit world? I mean, it stands to reason that if we can communicate with the dead, they are bound to be able to tell us the future, surely? They are beyond earthly constraints and time means nothing to them. And, of course, rather than giving us information that might lead to better lives for the whole of humanity, they'll choose to give us stock market tips, so we can cash in big time.

Al Manning, founder of the entirely credible and still extant ESP Laboratory, lay down on a couch and put on a funny voice to channel the deceased "Professor Reinhardt" for Gunther's benefit in July 1970, making a series of vague but - Gunther claims - generally accurate predictions for the remainder of the year:

The market, he said, would do nothing very exciting for the next few weeks. (It didn’t.) It would probably drop slowly until early or middle August. (It did.) Then it would resume the summer rally begun in June. It would climb, but not spectacularly, until October. (This was essentially true. The Dow did climb spectacularly for a week in late August, but September was a lacklustre month and the overall effect was one of slow, uphill plodding from August 15 to September 30.) Airlines and railroads would be particularly good stocks to have during this six week period. (They were. The Dow-Jones Transportation index climbed steadily and fairly fast the whole time.) But October would be a bad month — in fact one of the year’s worst. (It was.)

Hmm. From my own researches it would seem that in fact the Dow climbed pretty consistently throughout the period, with only a minor temporary fallback in October. One might suspect Gunther of fibbing to make his story more interesting. "Man adopts comedy German accent and fails to foretell the future" is not so compelling a tale, after all.   If you don't fancy transacting with the dead to get an edge in the market, why not try witchcraft? Gunther joins a Chicago coven who specialise in financial services. Rather than simply asking for tips, they take a more active approach, asking their pet demon Panandrio to give their stocks a boost. Panandrio is a creature whose nature is uncertain:

Nobody in the coven really knows who Panandrio is. One theory is that he is an ancient but unaged “elemental” — that is, a godlike being created long before the first man ever shambled along the earth. Another theory is that he is a ghost of some actual human being — perhaps an ancient one, perhaps somebody who died quite recently, perhaps a banker or stockbroker. Panandrio himself hasn’t said.

When Panandrio makes himself manifest it is certainly dramatic:

“Panandrio!” said Zayga. “We conjure thee, come into this room!” She was standing at the altar, facing east.   The other coven members repeated the words. There was a silence. Zayga then turned to the north and said the words again. The coven members repeated after her as before. Then to the west, then the south. And then there was a very long silence. Nobody moved for at least a minute. Everybody was staring at a dark corner of the room, where some tall dried plants that I guessed were pampas grass stood in an urn on a small table.   It was eerie. The psychic supercharging was obviously well advanced. Or perhaps the liquor and wine were responsible. What should have seemed silly seemed, instead, deadly earnest. Here we were, twelve adults in the middle of the city of Chicago in the middle of the twentieth century, gaping into a dark corner and waiting for a spirit to appear.   “Come on, now, Gunther,” I tried to tell myself. “Shape up! Gather your wits about you, man! You know there is no such guy as Panandrio.”   But I shifted my mirror nonetheless and stared into the corner with the rest of them.   And the pampas grass moved.

Woo! Since Gunther says there was no source for a draught, then clearly the only explanation is that an ancient elemental (or dead stockbroker) did it. With Panandrio clocked in, the coven sets about its purposes, with members taking turns to come forward and ask for his help.

Juvat announced his request in plain English ... "We've bought five hundred shares of a company called Robertshaw Controls", he said. "We want the price to go up next week."

Zayga said, "This circle is yours to command."

Juvat left the circle, went to a table and picked up a large five-pointed star cut from white posterboard. ... Written across it, on both sides, in thick red block capitals, were the words ROBERTSHAW CONTROLS.

Holding the star above his head and reciting an appropriate spell, "Juvat" conjures Panandrio to do his bidding. Gratifyingly after all this palaver, the following week there is a sudden jump in the price of Robertshaw shares. Woo! again.

After that demonstration, there would seem little point in continuing the quest, but Gunther tramps doggedly on, though the chapters that follow seem distinctly anti-climatic. Tarot cards, dreams, crystal balls - all have their advocates prepared to make grandiose claims about their efficacy.  Someonce called Yo Brenner thinks a particular magic square holds the key to riches:

"There is only one possible way of placing those sixty-four numbers to make that diabolic square ... Only one. Out of all the millions of possible arrangements,  only one makes a hypermagic square."

... "It must mean something!" he cries. "Those sixty-four squares are locked into that pattern. Locked, I tell you!"

... "I have discovered the reason," he says in a hoarse half-whisper. "It turns out that these numbers - the numbers themselves and their positions in the square - are a code describing future events."

When you put it like that, it seems obvious.

With so many different magical methods available, how is one to choose which is best? Happily Gunther gives us a selection of predictions from some of his interviewees so given the benefit of hindsight we can make an informed judgment. One fact that make this task especially simple is that during the years 1973-1974 there was a major worldwide stock market crash. So did anyone spot it coming? Nope. Those of Gunther's prophets who say anything specific about this period all reckon that 1974 will be, as Madeleine Monnet puts it, "one of the best years in the history of the Dow-Jones index". No wonder she never made those millions.

The remainder of Gunther's books consists of entry-level instruction in the arts practised by his interviewees. If you are gullible and desperate to be rich, you can buy a copy of the book and try them for yourself. (Don't forget to send me my 10% commission, though: failure to do so will result in strange nightly visitations and clammy invisible hands clutching at your throat.)