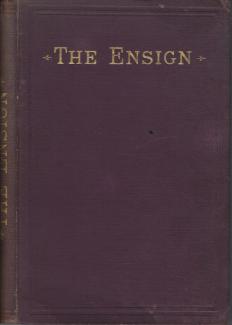 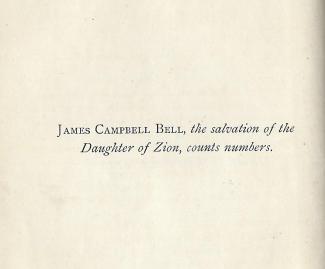 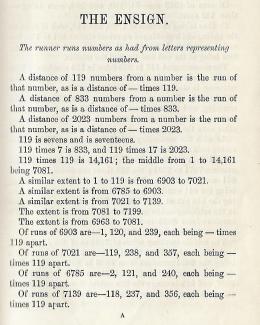 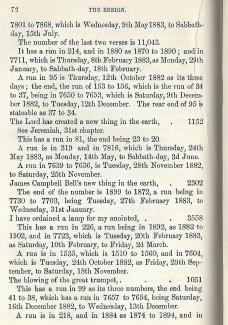 James Campbell Bell, the salvation of the Daughter of Zion, counts numbers.

In this single sentence, which appears alone on a page before the main body of the text like a dedication, James Campbell Bell gives a perfect precis of what follows: a grandiose flowering in which his religious mania is bolstered by numerology.

Bell calls himself "the runner", as being the one who identifies "runs" like those listed here. The seed numbers for these runs are obtained using simple numerology from passages of text taken largely from the Bible and events of his own life. by taking all the Roman numerals in the text and adding them together. Thus "the captivity of Israel" = C + I + V + I + I + L = 100 + 1 + 5 + 1 + 1 + 50 = 158. Having got his numbers, he is able to make significant connections.

97 has a run in Saturday, 6th April, as Friday, 5th April, to Sabbath-day, 7th, when Jesus and Thomas were in company the Sabbath succeeding that of the Resurrection.

Amidst all the scriptural analysis we learn that Bell was born on the 4th April, 1822, that his father, Thomas, was born in 1773 and lived to the age of 56, and that his mother died on the 30th January, 1870. Barbara and John Bell are also mentioned, apparently his brother and sister.

The runner put into the post-office in Edinburgh a missive, which he wrote on Monday, 4th March, for Archibald Macphail, Rosdhow Lodge, near Luss village, Dumbartonshire, giving him the address in Victoria of his brother, Donal Macphail, as at post-office, Korong.

Bell as well as being "the runner", is also, we are told, "the ensign" of the title, "a Jew", "of Israel", "the king's son" and "of the Free Protesting Church of Scotland". He "opens seals" and:

The middle of the twenty one letters, Jerusalem, Samaria, Sodom, is the initial letter of Adam, and of Abraham, and of Ariel.

Unlike more conventional works of numerology Bell's work does not promise to reveal your fate nor the names of horse-race winners. Its only purpose seems to be to demonstrate the occult significance of James Campbell Bell, saviour of the Daughter of Zion, opener of seals, correspondent of Archie Macphail.