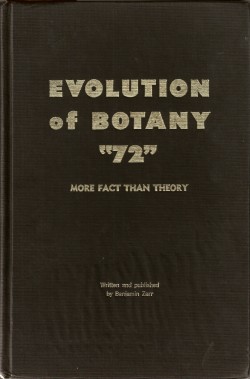 Science is hard, man. You have to know all those theories and equations and stuff, and if you get it wrong it just doesn't work and you get rotten grades. Wouldn't it be cooler if you could just, like, make it up?

If some altruistic person, looking to help those who suffer from a short attention span and an overwhelming desire for chocolate chip cookies, one day comes to found The School for Stoner Studies, I'd propose that this book be one of the first to be added to the curriculum. Only the truly high can comprehend it, I feel. Take a deep toke and grok on this, for example:

Nowhere in a plant is there true life. At no time is a single pollen active. At no time does an anther give TRUE BIRTH to pollen. There are no labor pains. An anther is destroyed but in its destruction a single gigantic mass of protoplasmic starch is broken down into millions of inactive dust particles. And even though each dust particle represents a single pollen, not one has life! Not one pollen has life, but when reactivation takes place a latent power is restored which does revitalize its mortal energy ...in a chemical way!

I do believe pollen and spores are identical in substance and performance. An original source of life comes back twice, once as the original plant with an epidermal skin and, second, by reappearing without this skin of many colors. Let me emphasize the following: every person who suffers from hay fever can be reconciled to the fact that the mucous in his or her nose REACTIVATES pollen so that they swell! This swelling tickles the internal hairs of the nostril with subsequent attacks of sneezing. Reactivation of pollen took place in your noses, you lucky people! Reactivation can take place every time protoplasm, heat and water get together.

That's some deep shit there, man. Zarr sees through the jive that the growth of plants occurs by cell division. No way! Every tiny seed is identical to the full-grown plant, dig? Except - and here's the cool part - for WATER and HEAT:

Listen! A banana is created the moment pollen accumulate within the ovary of a single blossom of a banana tree. That’s all! The wall of the ovary becomes its peel. Every ovule gives birth to its own complement of seeds. A miniature banana of less than one inch develops and it contains as many parts then as it does when the whole is fully grown.

Moisture is forced from the root of the banana tree into this miniature banana. The sun bakes the whole; steam is created. Every part inside the banana blows up just like a balloon. At no time are new cells ever added. Within the pulp of this banana every seed grows as it is fed by its umbilicus which is connected to a central artery. Every artery brings water from its root. Pulp and seeds are baked together and as they do both are forced to occupy more space. Thus every internal part of a banana expands and this expansion forces the external peel to expand also. The peel must expand in proportion so that it may safely keep under restraint all of its contents. 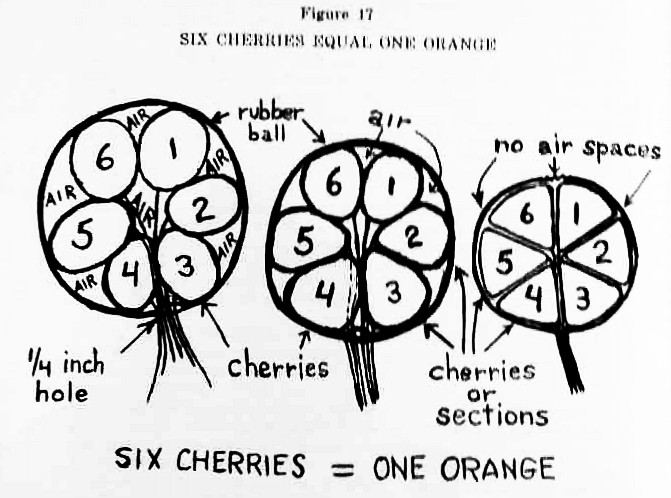 The more heat inside a banana the sweeter the meat; the more heat on the surface of the banana and the peel turns from sickly green to golden yellow. The weight of the protoplasm, the pure element, of any fruit at its beginning is exactly the same as it is at maturity. A fully grown fruit weighs much more because of its moisture content. Reduce the whole to an ash and the weight of the ash will correspond very closely to the weight of the original pollen plus the ovary! In the animal kingdom this is not so because waste products become part of every animal. Body weight cannot be separated from the true protoplasmic weight.

These are my sediments! Pardon my English, I mean sentiments! There are no descriptions in any hook of biology which shows how any fruit or vegetable grows from a seed to its final outgrowth. My descriptions should be scrutinized step by step. When you see how my tulip and my apple grow from pollen your faith in mitosis will totter to its deepest root. Do yourself a favor and shatter your belief in this senseless theory completely. Sever these ties and you shall understand life and evolution for the first time.

Therefore growth occurs my way — never by metabolism with release of energy, never by cell-division! Energy is NEVER released by plant life! Chromosomes and genes NEVER direct the destinies of any living organisms so that they will grow in size and this should really be one of the functions of these figments of the human mind. Growth should be one of their duties and it should be performed as meticulously as the creation of every feature of an organism. Bacteria, molds and millions of microorganisms do not have chromosomes, why should any other living entity have them?

The same logical explanations can be shown in the following diatribe. Dough rises because its flour becomes activated; it becomes alive for the second time. Yeast cells give up gases and air pockets which force wheat pollen to grow again. No act of metabolism is the enforcer. Water and heat force yeast cells to explode inside the dough. Dough is forced to rise and this step proves the fact that matter can he forced to blow up WITHOUT metabolic processes.

Zarr is not falling for that DNA foolishness neither, and makes no bones about saying so:

The Watson-Crick structure of DNA is the most ridiculous theory of heredity that was eveir suggested by man. A true scientist would never have concocted such mish-mash. Because biologists have irrefutable evidence that certain chains of events had to take place during embryolization in order to produce every part of an organism they devised a system which would give these results. They worked backwards — I started with sperm and egg. My results are FORCED into every embryo! Force . . . . and plenty of it!

Every student can see sperms play under a microscope. They have eaten enough eggs so that they are well acquainted with their contents. [emphasis mine] They do not have to be mesmerized to be taught otherwise. If students believe the intricate steps of a Watson-Crick design they are gone! 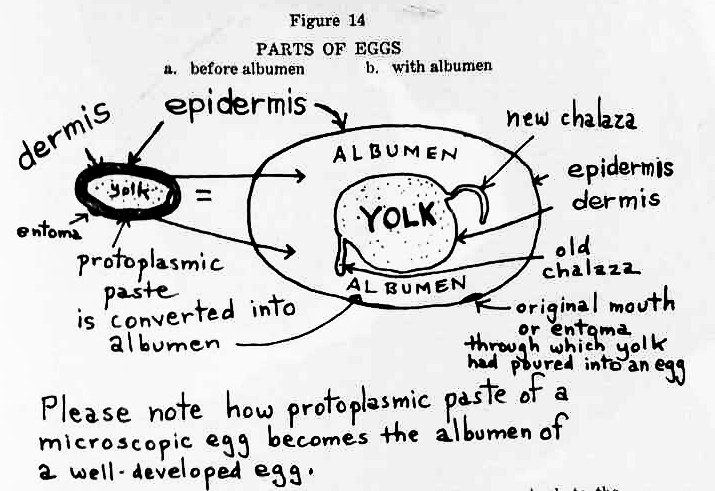 The Watson-Crick structure was accepted because biology was hungry for any theory which would explain the intricacies of life and evolution. The Watson-Crick theory is more intricate than the intricacies they try to explain. This structure does four things. It is supposed to show how genetic information is coded within a cell, how it is replicated, how it is translated and how it does mutate! Just as in Latin and in readings of the Scriptures there are many translations possible for the same hieroglyphics and the same basic words. Genetic translations of today are impossibilities whether you like it or not.

Right on, brother! And to blow your mind completely, here's how a picture showing the TRUTH about how bacteria are created. This is what The Man is hiding from us, people, so think about it while you eat your eggs. They won't teach you THIS in school, baby. 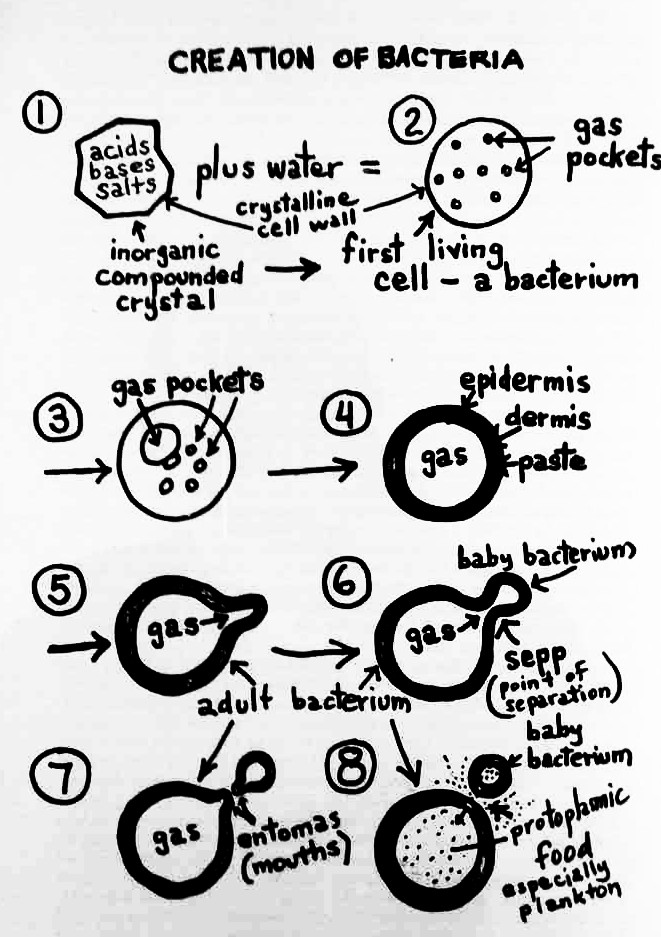 Re-reading this, I just

Re-reading this, I just noticed that he also claims to have cracked abiogenesis! After all his "creation of bacteria" starts with inorganic compounds and ends up with... well, bacteria. Someone should call the Nobel Prize committee!

Just realised that "Doctor B

Just realised that "Doctor B Zarr" sounds like something out of The Rocky Horror Show.

You're right, that is pretty

You're right, that is pretty B Zarr.

Reminds me somewhat of Atomic

Reminds me somewhat of Atomic's Bible, another book reviewed on this illustrious site:
"You can take an acorn apart and see two of its structive [sic] components, the hull and the kernel. You know there are the three components in all, the third being the life-giving image of the kind of oak that acorn will grow. Then that image has to come from the atom, so we shall study the atom parts and find the life-giving image within the atom."
It's bananas all the way down, begorrah!

We need to roll Benjamin Zarr

We need to roll Benjamin Zarr out for the creationism crowd. Not only is life not what observable, tested-and-confirmed science says it is, it's really nothing more than pollen and water and heat. Kind of like a big ball of bread dough but without, you know, yeast, which would be alive, which would sort of defeat the whole argument (if it's an argument) by this writer (if we can reasonably call a bull goose loon a writer). Sic the creationists on this. They need something to do besides hammering on their tautology gong.

The secret is in the phrase

The secret is in the phrase 'reduce the whole [fruit] to an ash...' - been smokin' them banana skins again, Ben?

Reminds me that as a youth I

Reminds me that as a youth I did try to get high from a banana skin. No joy, you will be unsurprised to learn.