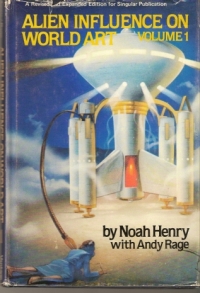 If this unorthodox work ever wins a wider readership, it might greatly simplify the practice of art historical analysis. Forget all that dreary study of the culture from which an artefact springs, instead all you need do to understand it is to half-close your eyes and see how much it reminds you of a spaceship.

Noah Henry and his accomplice Andy Rage continue the approach first popularised by the egregious Erich von Däniken, of wilfully misreading the art of the past to discover apparent clues to visitations from space. But whereas von Däniken guilefully attempted to persuade his readers with a careful choice of illustrations, fixing only on items which have a superficial resemblance to UFOs, most of us would need a dose of LSD before we would see any such in Henry and Rage's examples.

Their methodology is to start with the infamous passage in Ezekiel 1 that is often interpreted as describing an alien spacecraft, the one that begins:

And I looked, and, behold, a whirlwind came out of the north, a great cloud, and a fire infolding itself, and a brightness was about it, and out of the midst thereof as the colour of amber, out of the midst of the fire.

Henry and Rage construct their entire shaky edifice on the assumption that this passage provides evidence of the particulars of the design of a UFO, just like that shown on the cover of their book.

A spacecraft, actually a shuttlecraft descends to earth. As it settles on the sandy terrain, the people of Ezekiel's time, far more primitive than we would care to believe, look upon it with fear and awe.

Two of the most distinguishing characteristics of the ship Ezekiel encountered are its "feet" and its "wings". The ship touched down on tubular, metal, telescoping legs that had disks at landing point. There is no question that they were metal. While Ezekiel labels the metal "brass", it is some alloy yet to be discovered here.

With a similar self-confidence the authors go on to identify the "wings" of the machine as "rotors of four helicoptor units". These helicopters, "called 'cherubims' in the Bible", "had similarities to animals". For no clear reason other than to fit with Ezekiel's text, the helicopters had faces engraved on them, of an eagle, an ox, a lion and a man respectively. (Perhaps that was the alien fashion of the time, as featured in the interstellar hit TV show, "Pimp My Starship").

Having established to their own satisfaction that this is what the chariot of the gods looked like, they then proceed to find its image everywhere in antiquity, in everything from Eskimo masks to North American food boxes, from the visions of Hildegarde of Bingen to Assyrian cylinder seals. 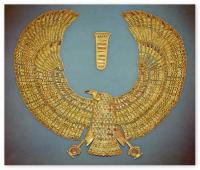 For example, they write of the so-called "Vulture Collar" found in Tutankhamen's tomb, shown at right:

How easily this flexible vulture collar and counterpoise fits the design of the descending spaceship.

But since the only source for the design of which they speak is their own illustration on a preceding page, and since furthermore the collar looks just like a bird and not at all like any kind of spaceship, their commentary acts more as evidence of the nuttiness of the authors than of any alien presence on our planet in the distant past.

In an even odder passage a statue of an animal resembling a bearded species of gnu or yak, found in Eastern Turkey and dated to circa 2500 B.C., is analysed as follows:

This creature is a distorted idea of a spaceship. Here are the signs: horns, feet like a bull or a calf, and a beard which is the symbol of the powerfully driven gases from the ship when it is in the air. All previously-unknown creatures and gods, from any religion, have beards to represent the ship's gases. [emphasis added]

As the song so nearly has it, "I'm looking at the world through spaceship-coloured glasses, everything is spaceships now".

Although this is supposed to be volume 1 of a series, and it's also claimed to be the "revised and expanded edition", this seems to be the only published work by Noah Henry. What a loss to scholarship!

Seems perfectly reasonable to me.
Submitted by Alfred Armstrong on 14 Apr 2010 - 10:10 Permalink

Are you channelling Reg

Probably inspired by the

Probably inspired by the Monty Python skit of the late 60s, where the French have an airliner that looks like a sheep.
Submitted by Ian Kearey (not verified) on 11 Apr 2010 - 19:31 Permalink

Oh, deep joy. This looks like a prime contender for inclusion if anyone updates John Sladek's marvellous 'The New Apocrypha', in which he debunks and generally pours merited scorn on these loonies and their like. Seek out the Sladek if you can - it dates from the 1970s - meanwhile I'm looking for spaceships in the Nazca lines, ley lines, fishing lines, telephone line...
Submitted by Alfred Armstrong on 11 Apr 2010 - 19:55 Permalink

Thanks Ian. My battered copy

Thanks Ian. My battered copy of The New Apocrypha is much treasured - one of the inspirations for this site, I would say.

I had always suspected this;

I had always suspected this; but my doctoral advisor rejected my original proposal to study this at university. Now I know I was right!