Perfect Health and Beauty for Parents and Children 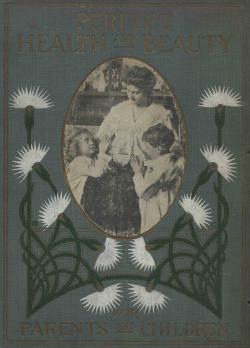 Mary Ries Melendy would have loved Facebook, I think. This book is generously illustrated with photographs of idealised family life, each one just the thing to delight the sentimental portion of humanity and nauseate the rest. Like and share, dear readers, you won't be able to help yourself.

Her aim is to help parents to raise bright and healthy children, and there is nothing wrong with that, although I suspect many youngsters may have found her methods trying.

Take an illustration. Papa takes Johnny and Charlie for a walk, and tells them beforehand that he wishes them to remember something nice about it to tell mama who is not able to go with them. On their return Johnny is bubbling over with enthusiasm and eagerness. "Oh, mama," he cries, "I saw a chipmunk running along the fence. He winked at me. I chased a butterfly, a big yellow and brown one. Papa taught me how to know an oak tree by its leaves. We had such a splendid walk!" But all Charlie could say was, "Oh, mama I'm so tired. It was so far. I wanted some bread and jam."

Here we have the problem in its concrete form. What can be done for Charlie, who "went so far," and saw nothing? He needs training, and there are thousands like him.

Poor Charlie. He is going to be made to be observant whether he likes it or not. If he has sisters, they are in for it too.

There is a strong necessity that girls as well as boys should receive this training. They are early brought into contact with duties connected with physical objects, as the multiplied activities of the home claim their attention. In fact, the daily comforts of life for the whole household depend almost entirely upon the executive power of the female element ...

Dr. Melendy is no feminist, despite her education. Oh, wait though, where's that Ph. D. from? Ah, yes, The Hahnemann Medical College, "largest homeopathic medical college in the world". If you are going to get a qualification in made-up nonsense, get it from the best.

So what is the training she advocates? Although she is keen to stress more than once that a child's imagination should be encouraged and differences tolerated, much of her practical advice betrays a more narrow view.

HOW TO TELL A STORY

Let the events be few and comprehensible, the plot simples and true, or at least possible, and with some rational connection. Omit long words. Keep out all that is hideous or vicious. Do not introduce cruelty in any form, whether of crime or punishment. Exclude the broadly ludicrous, while a little incidental gentle humor is allowable, but not as a main feature. Regard the telling of a story to take the child into an atmosphere of truth, beauty and goodness. Clothe the story with lofty ideals, just as you would have the youth cherish through life. It is indeed a golden moment for both father and child, or for mother and child.

No Alice, no Peter Rabbit, no Oz, no Brothers Grimm. Charlie, I weep for you, though I know you are raised to be stoical.

THE GRACIOUS MINISTRY OF PAIN

You are moreover, to teach him that any little pain which may come to him is not necessarily harmful, not to be regarded with terror. Many natural processes are attended with pain and seeming disorder; they mean growth, and are to be welcomed accordingly. Our children are to be taught that pain is a kindly warning, a ministering angel, and the idea that it is to be regarded with dread or horror should be carefully displaced by a more healthy view.

True, the girl will experience the discomforts which attend her growing years, while the boy may have his accidents or his little conflicts with his mates. The idea of the wise parent will be to make both children put the emphasis  upon other phases of these experiences, and let the idea of the pain involved sink into the background. Let the girl know that the pains which overtake her are the sure tokens that she is coming into a sweet and gracious womanhood and that functions and possibilities of a sublime nature are being opened up to her even by the very discomforts and pains which attend her blossoming life. 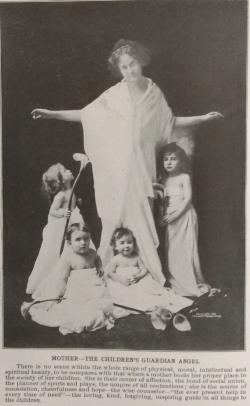 It will not be a surprise to find that Melendy was a theosopher as well as a homeopath, since this is very much in line with the Theosophical view of pain. "So Johnny broke your nose, Charlie? What a kindly warning for you!"

The stiff-upper-lip approach is also recommended when dealing with bullies, who are "puzzled and perplexed" by it, saying:

The world owes Dr. Melendy a great debt for this lifelike depiction of the speech of the American roughneck in that period.

Of far more consequence than any mere childish truculence is the sin of self-abuse, to which Melendy devotes two chapters under the heading "Purifying the Sex Thought". Here's one uplifiting anecdote about a seven-year-old boy who "contracted the habit" from "the neghbor's children", according to his mother, a judge's wife:

She took him in hand, scolded him, whipped him and talked to him — but all to no avail. When he was whipped he would scream and promise he would never do it again. In her despair she wrote me she would rather he should die than grow up with the terrible habit. She said he had scratched his private parts until the sexual organ was constantly erect and red and fiery, and he he would cry and say, "Oh, mama! It itches so hard."

I wrote to her that I was sure a temporary inflammation had set up in the genital organ, which needed medical treatment. I told her when he itched and began to rub the parts, to place him in a warm bath, making the water hotter and hotter, add two tablespoonfuls of borax to the water, rub the parts gently but thoroughly with her hand to wash out all irritating secretions, and at night when she put him to bed, place a cold compress between his limbs over the sexual organs, give him a powder which I sent her to allay excitement and strengthen the nervous system, then pray for him and leave him in God's care.

I'm sure this treatment had some effect. As a judge's son, presumably he could afford to get therapy in later life. 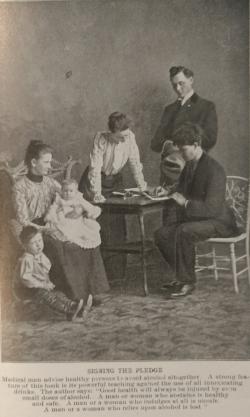 As one might expect given the author's training, the book contains much dubious medical advice. Scarlet fever is to be treated with hot baths, tincture of aconite and tincture of belladonna; measles with "Ostine" (a patent medicine sold by Melendy of uncertain relationship to the drug of the same name currently available). Typhoid fever is treated thus:

In the treatment of this disease bathe the skin in hot soda water and whiskey, or acohol; then rub all over with the best olive oil; bathe the feet well; then place hot water bottles to the feet, and at the same time give internally gelsemium and bryonia.

Olive oil is also the treatment for rattlesnake bites, which is handy.

It may seem a perverse action to pour a whiskey-and-soda over yourself, typhoid fever or no. but of course Melendy is no fan of alcohol taken in the more traditional manner.

What institutions are notoriously the partners of the places where drink is procured? The brothel and the gambling den.

Fun-loving gal, wasn't she? What she was like herself as a mother we may never know. It appears her only son, Robert, died in Cooke Illinois in 1949, and there is little other trace of him online apart from his marriage certificate from 1919. What use is that to us nosy people? Thumbs-down!

I rejoice in the end of that

I rejoice in the end of that line of ignorance.