Spiritual Truth for the Young 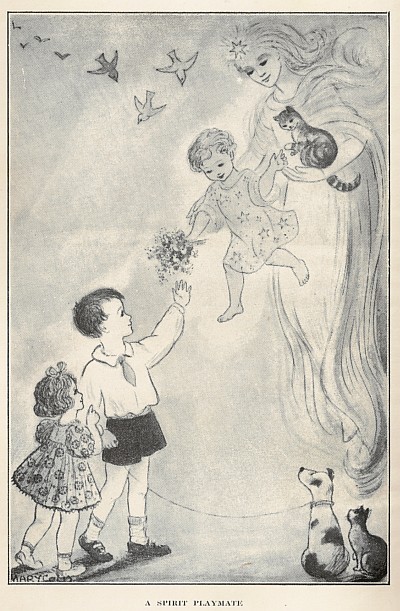 This little book is an introduction to Spiritualism for small children, which understandably emphasises the fairy-tale aspects of the faith. Early on, for example, the reader is told about the etheric body, that part of one which is supposedly eternal:

... the etheric body is always perfect. If the physical body is not quite as it should be - for instance, if a limb is lost through an accident, or if a person is born blind, or if the physical body is weak and ill, the etheric body has none of these troubles. So you can see that, when a cripple passes over, he finds he can walk and run just like other people; and a blind man finds he can see perfectly. Even one of those poor unfortunate people whose minds are out of order, on passing over, is able to think, and speak, and act, as sensibly as anyone else, because he is no longer hampered by an imperfect brain. Think what it means to a poor cripple, or blind man, to know that when he passes over, he will regain, in full perfection, his lost faculties!

Doesn't it make you want to die - sorry, "pass over" - right now? And if the thought of a new, more perfect, you isn't tempting enough, then there are even greater perks on offer on the other side:

... if you want an ice, or some chocolate, you will only have to make a mental effort and it will be created by your thought!

Free chocolate? What child could resist? Unfortunately, though, there is still school to attend, albeit with a rather different curriculum:

For instance, one group carried a purple banner and was known as the "Ocean" group. Its course of study considered God as the Father of mankind, and men's relations to one another as brothers. Another group had blue for its distinguishing colour, was called the "Beacon" group and studied such things as conscience, and how God is revealed in nature.

Now the afterlife is starting to sound rather less enticing. A bored little ghost might be tempted to contact the living as light relief. Happily, there are a multlutude of ways by which the trick can be managed. Traditionalists will favour "rapping", not in this case the mode of expression popularised by Bubba Sparxxx and Ol' Dirty Bastard, but the making of mysterious knocking noises. Also favoured is the planchette, used to make automatic writing, though today's spirit friend may find that a little low-tech. If talking via a medium does not appeal, why not wave and blow a trumpet or two? And do not forget to manifest a bucket or two of that marvellous all-purpose material, ectoplasm, which:

... can be made to take on any shape or colour, by the power of the spirit person who is using it. 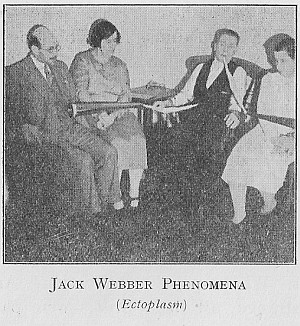 There you are, then, little one. Now you know about it, there's nothing creepy or strange about Spiritualism, is there? By the way, you remember you said you wanted an XBox? Well, I got you a Ouija Board instead. Much better, eh? Happy Birthday!

Ghostbuster taught me everything I needed to know about spiritualism It is a shame that psychotics and sociopaths brain's will only function normally once they are executed for crimes that probably doomed them to hell, oh wait did I say shame I meant part of god's plan
Submitted by Aria (not verified) on 29 Jul 2010 - 17:38 Permalink

It sounds unbelievable, but... as if by divine intervention, I received a mystical email from the other side about the Odd Books site review of this book. Thank you, bright spirits!
Submitted by Robert Hare (not verified) on 29 Jul 2010 - 04:06 Permalink

I love the discussion of

I love the discussion of Spiritualism, but won't be satisfied until there's a Spiritoscope in every home.
Submitted by Alfred Armstrong on 29 Jul 2010 - 10:37 Permalink

Wooooooh. There was a strange

Wooooooh. There was a strange rustling, a cold shock which made the hairs on my neck stand up, and then ... this comment appeared as if out of the ether.

There's a song by Blind

There's a song by Blind Alfred Reed from the late 1920s. 'There'll Be No Distinction There', which summarises your first extract from the book - but with a catchy tune, too!